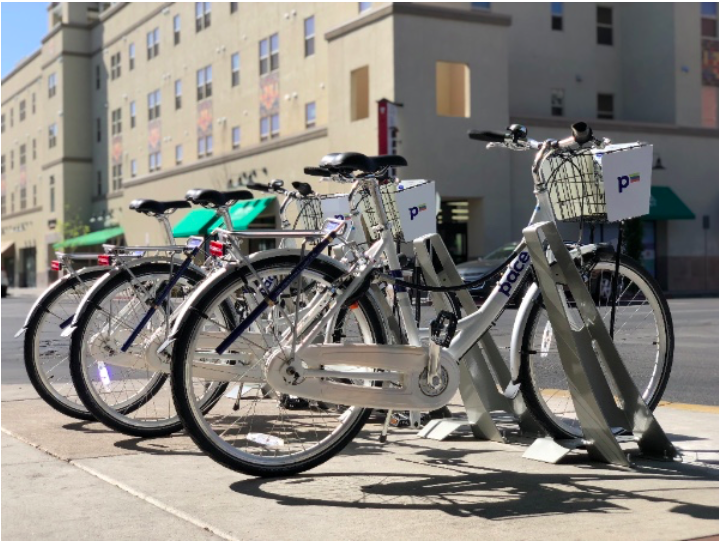 The additional Pace bike share racks are set to be installed on June 21st and 22nd. The additional bikes will be deployed to the racks on June 23rd and 24th. The bikes will be available for use as soon as they appear at the racks. Some areas of town that people will soon see the additional Pace bike share stations include Downtown, West Downtown, Sawmill, Midtown, and more! To find out more about how to use Pace, you can download the free “Pace Bike Share” app, available in the App Store or Google Play. The app allows riders to locate available bikes and parking locations and unlock bikes at the touch of a button!

Rio Metro Regional Transit District and Zagster are thrilled to debut Albuquerque’s expanded bike share system today! 250 bicycles are now available for residents, visitors, and students to make on-demand trips with just a tap on their smartphones. Pace features a first-of-its-kind dockless bike sharing model that blends predictability and flexibility for riders while preserving order and safety for communities. With Pace, users will still enjoy the predictability of dedicated bike share hubs in key locations, but they will now be allowed to lock the bicycles to public bicycle racks as well. This model enables true point-to-point travel while ensuring riders can reliably add bike sharing to their daily transit mix.

You can download the free Pace Bike Share app from the App Store or Google Play. Riders find available bikes and parking locations in the app and can unlock bikes with the touch of a button. Rides cost $1 per 30 minutes, and the first 30-minute ride for every new user is free. Learn more at riometro.org, sign up via email, and you’ll receive $5 in ride credits!

DowntownABQ MainStreet Initiative’s pilot bike share program, BICI, was successful! The program moved under Rio Metro Regional Transit District’s management in May 2016 and they are working to create an expanded program called PACE. The program will offer 250 bicycles/50 stations from downtown to Nob Hill, which will launch in late winter/early spring.

***BICI was deactivated on January 14 at 11:59 pm. Active member received an email as well information within the Zagster bike share application on the opportunity for a ride credits in the PACE program.

OUR BIKE SHARE IS HERE! You can sign up for a 24-hour pass, monthly, or annual membership at bike.zagster.com/abq. Trips under 90 minutes are FREE; then pay just $3 an hour after that! All you do is unlock your bike after receiving your code, ride, and then return your bike to any BICI station when you’re done. It’s that easy!

LAUNCH BICI was launched on National Bike to Work Day on May 15, 2015, with 65 bicycles and 13 stations throughout downtown Albuquerque. Two months later, 10 bicycles and two stations were added to the network for a total of 75 bicycles and 15 stations. And we’re still growing! BICI is a shortened version of bicicleta, the Spanish word for bicycle. BICI stations were strategically located near transit to provide for the first and last mile of connectivity by filling in gaps where no other transportation mode exists. The Executive Board of the Rio Metro Regional Transit District (RMRTD) unanimously approved adopting the bike share under their management and growing the program beyond Downtown Albuquerque. RMRTD will continue the existing program until expansion plans are finalized.

GO ANYWHERE. SERIOUSLY. Zagster provides greater flexibility for users because the lock is integrated into the bike. So, you can lock your bike to any ordinary bike rack while you cruise anywhere around town. All you have to do is return the bike to a BICI bike share station when you’re done!

ONE YEAR OF DATA The results are in, and we’ve seen a successful reception and impact of the BICI bike share program. Between its launch in May 2015 and May 2016, over 5,000 trips were taken by over 1,100 users, averaging 31 minutes per ride. 65% of users were from New Mexico, and a full 35% were visitors from outside the state. Further analysis by the Mid-Region Council of Governments found that there are about 31,849 people, 28,562 households, and 50,721 employees within a ten minute bike ride of a BICI station. That’s lots of people who can use our system! 32% of all bicycles trips in the Albuquerque Metropolitan Planning Area (AMPA) are made by women. Yet interestingly, 54% of BICI users from the AMPA are women! 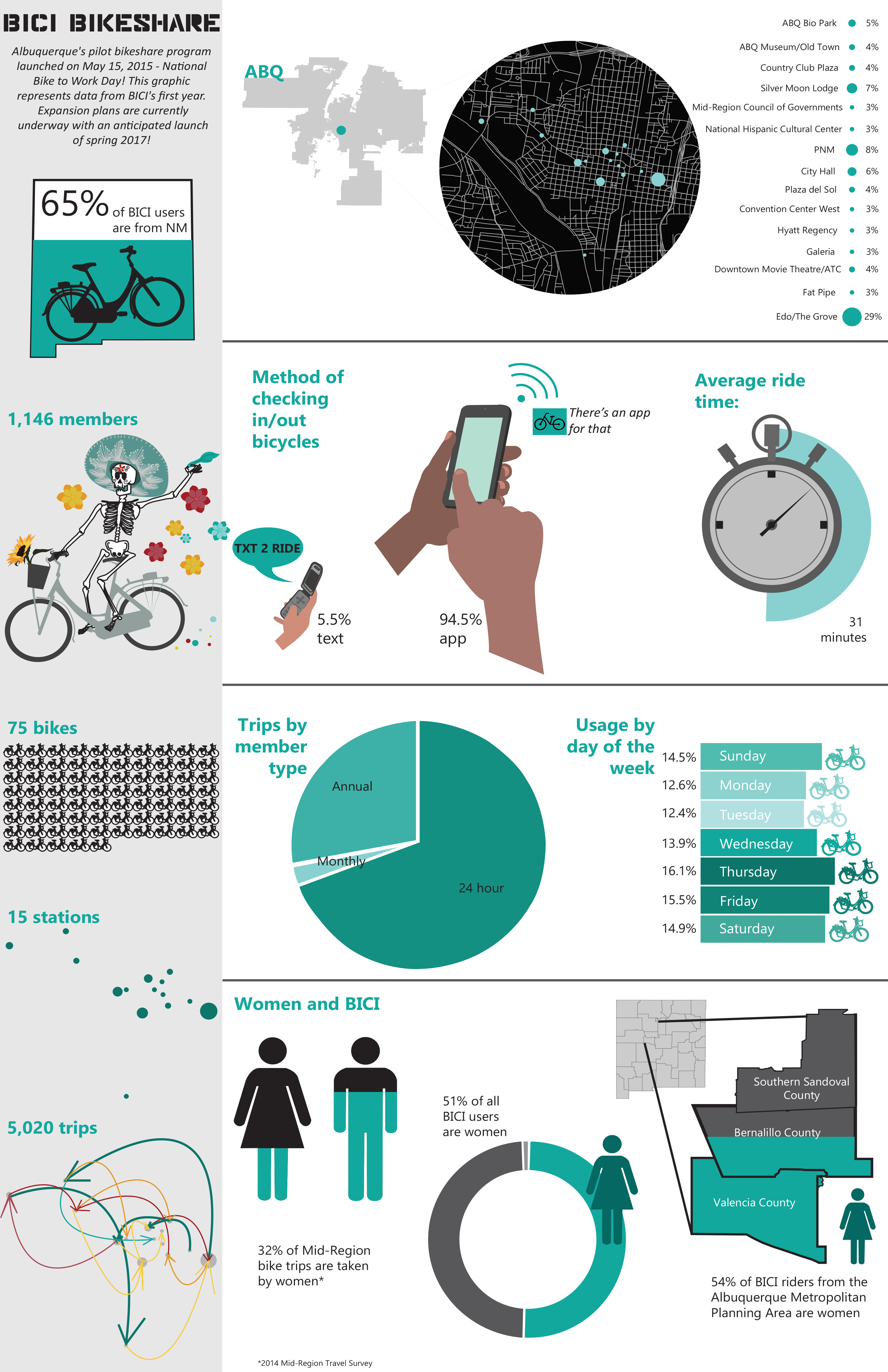 This program was made possible with a seed grant from PNM, and additional private sponsorships. Thank you to the Mid-Region Council of Governments for the usage data and graphics!